Roslyn Tyler was first elected Delegate for the 75th District in 2005. The 75th District includes all of the Cities of Emporia and Franklin and all of  Brunswick and Greensville counties and parts of Dinwiddie, Lunenberg, Southampton, Sussex, Surrey, and Isle of Wight Counties. Delegate Tyler is Chair of the House Education Committee and is a member of the Appropriations and Public Safety committees.

Delegate Roslyn Tyler, who serves as Vice-Chairperson of the Broadband Advisory and Chairperson of the House of Appropriation Compensation /Government Committee, sponsored House Bill 2304 that passed the House and the Senate with bipartisan support.

Delegate Roslyn Tyler, who serves as Vice-Chairperson of the Broadband Advisory and Chairperson of the House of Appropriation Compensation /Government Committee, sponsored House Bill 2304 that passed the House and the Senate with bipartisan support.

The purpose of HB 2304 is to allow electric utility companies such as Dominion Energy to provide high speed internet services to unserved communities and bridge the digital divide in the Commonwealth. Virginia ‘s invested owned utilities are already building broadband networks within their existing grids. This program will allow them to build more capacity than they need strictly for the grid and lease that capacity to ISPs to serve unserved Virginians.

This pilot project has been successful in serving other counties with over 538 miles of fiber optic deployment and over 11,100 home, businesses and community anchors connected with thousands more in the pipeline. The House Bill 2304 will become law when signed by Governor Ralph Northam prior to July 1, 2021.

Broadband expansion/High Speed internet has been one of Delegate Tyler’s priorities and the Covid-19 pandemic has proven the necessity of reliable internet services for education, businesses, agriculture and economic development. The House of Appropriation in the 2021-2022 budget included $100 million dollars for funding localities through competitive grants.

Four officials representing the City of Emporia and Greensville County communities have endorsed former Virginia governor Terry McAuliffe, a Democrat, in his campaign for a second term in November.

“After this pandemic, our Commonwealth needs a leader who will act holistically to make sure all Virginians benefit in our recovery,” Astrop said in a press release. “From losing jobs to facing the risk of eviction, Virginians need big solutions and a forward-looking vision that won’t tinker around the edges. We need a bold leader like Terry McAuliffe.”

A push to increase the numbers of Black and Hispanic students at Virginia’s selective “Governor’s Schools” by changing admissions policies has failed, despite the support of Gov. Ralph Northam’s administration.

The bill’s sponsor, Del. Roslyn Tyler, singled out Saslaw and Petersen for blocking it, but said in a statement that she considers the effort a success “because it allowed students, alumni, teachers, administrators, elected official and other stakeholders to have a public conversation on racial biasness, inclusion and lack of diversity at the governor schools.”

She said she is confident that the Northam administration will push for reforms even without the legislation. 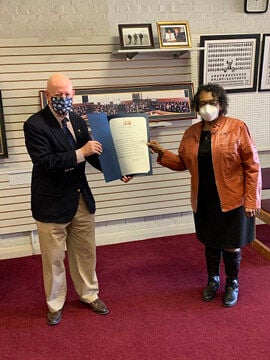 The House of Delegates of the 244th Virginia General Assembly adopted and passed House Resolution 95 calling attention to and noting the 165th anniversary of Jackson-Feild Behavioral Health Services.

In a country not just 250 years old, the 165th anniversary of anything is an event to be celebrated. It is an especially remarkable achievement when you consider that only18 of our 50 states had been admitted to the union, important inventions such as the telephone, electricity, automobiles, airplanes, vaccinations, etc. had yet to be invented, and events that shaped our nation and world had yet to occur.

Delegate Roslyn Tyler recently presented Tod Balsbaugh, VP of Advancement, the proclamation at her office in Emporia. Jackson-Feild is grateful to the General Assembly for this document and for helping to provide essential mental health services to children with severe mental illness.

Delegate Roslyn Cain “Roz” Tyler, House of Delegates Representative of the 75th District, was elected to the Virginia General Assembly in 2005. The 75th District includes all of the City of Emporia, all of Brunswick County, all of Greensville County and parts of Dinwiddie County, Lunenberg County, Southampton County, Sussex County, Surry County, Isle of Wight County, and the City of Franklin

As the elected representative of Virginia’s 75th District, Delegate Tyler serves on several committees which allow her to advocate for her Legislative Priorities which affect the District.  She has been appointed to serve on the following committees in the 2019 Virginia General Assembly:

View current and past session legislation >

Delegate Tyler was born on July 18, 1961 to Johnny and Gladys Cain in Emporia, Virginia.  She resides in Jarratt, Virginia in Sussex County with her husband, Rufus Tyler, Sr.  She has four children: Rufus Jr., Ronecia, Rosche, Rameka and two grandchildren, Makenzie and Karter.

Rural Virginia unemployment rate is much higher than other areas of Virginia. I supported legislation that would increase the minimum wage amount to 10 dollars and measures to help women seek equal pay for equal work.  I have been working hard to promote my district and counties’ industrial parks as shovel ready areas for economic development and job opportunities.

It was a pleasure to work with Secretary of Commerce Maurice Jones, who grew up in Kenbridge, Virginia and understood the challenges of rural Virginia under Governor Terry McAuliffe’s Administration. Additionally, Governor Ralph Northam continues to work to build Virginia’s economy. This is the reason I supported the decision to expand funding for the Governor’s Opportunity Fund which will help to bring new jobs and businesses to Virginia.

A good quality education, regardless of a student’s zip code, has always been one of my priorities. I was the first child in my family to attend a university and earn a degree. I realized that growing up in an area with limited opportunities, education was the key to living a quality life and earning a decent salary to raise a family, I have served on the state education committee for 10 years.

I am focused on SOL reform to allow teachers to be creative in the classroom while promoting academic excellence. I will continue to support funding for early childhood education, pre-k to higher education, expand career and technical education opportunities, maintain affordability for higher education and competitive teacher salaries.

As a health care provider, I realize that some families must make a choice between buying health care insurance and paying their rent or refilling their prescriptions. These are reasons I continue to support affordable health care coverage, affordable prescription drugs, assistance for family care givers and long term care.

With the closing of correctional Facilities and the layoffs of public safety staff in recent years, public safety was drastically affected and changed. This year’s legislators recognized the importance of retaining public safety officers and their valuable services and sacrifices on a daily basis to protect the citizens of the Commonwealth. Correctional officers and senior officers are two of the 19 state jobs with the highest turnover rate due to low salaries and hazardous work environment.

As a member of the Militia, Police and Public Safety Committee, supporting and funding our law enforcement officers and correctional officers has been one of my priorities. The 75th District has more correctional facilities (Greensville, Sussex I and II, Deerfield, and Brunswick Private Facility) than any other district in the Commonwealth.

l was pleased to vote in favor of the budget that included a compensation package for our state police, deputy sheriffs and correctional officers. The budget allocates $6,939,908 million dollars which will provide a $1,000 increase in the starting salaries for correctional officers and 1.5% percent increase for state employees effective August 10, 2015.

I would like to thank all public safety officers including our state polices, sheriffs, deputy sheriffs, correctional officers and emergency services for their dedication and commitment in making my district and the Commonwealth a safe place to raise our children and families.

In January 2018 I introduced HB 1418 for the Creation of Procedural Guarantee Act for Correction Officers which was passed by the House and Senate and approved by the Governor on April 4, 2018, effective July 1, 2018.  See Full Text and History of the Bill at LIS.virginia.gov >

Over three- fourths (3/4) of the 75th District is rural, and agriculture and forestry is an economic engine.  In Virginia, Agriculture and Forestry is its largest industry.  The Industry has an economic impact of over 70 billion annually and provide more than 334,000 jobs in the Commonwealth.

For this reason, I continue to be a strong supporter and advocate for the Agriculture and Forestry Industry.  I have a 100% voting record in supporting Farm Bureau Legislative agenda.  Recently, I co-sponsored successful legislation (HR 987) which updated agriculture nuisance provisions of Virginia’s Right to Farm Act.  The Act’s prohibition nuisance lawsuits against farmers by protecting them against false claims of nuisance and unfair judgements.

Because of my profound commitment to the industry, Farm Bureau has continuously endorsed my candidacy for the House of Delegates.   Additionally, the Virginia Loggers Association (VLA) awarded me the President Award in recognition of my continuous support and Leadership of the Forestry Industry.

This year, Senator Frank Ruff and I carried VLA’s Flashing Amber Light Bill (46.2-1026(26) which authorizes the installation of flashing amber lights on vehicles used for hauling trees, logs or any forest products.

As a youth growing up in rural Greensville County, our family traditional included hunting and fishing.  It was a male sport until later in the 1970’s when women began to participate.  Some hunted for necessity whereby others utilized it for family fun sharing community values and fellowship at the various club.